Ahem. Sorry about that.

Sir Kaydian’s barony is the companion piece to his lovely lady’s, Mistress Cassandra, given at the same event. I was very honored to be asked to take care of these backlog scrolls. They took me awhile (as is evident by the distinct skill-evolution between Cassandra’s and Kaydian’s, especially in terms of script) due to moving twice and the general stuff of life, but they’re done now, and soon I will be shipping Kaydian’s scroll so that they can be matted and framed and (I assume) displayed side by side. Both of them are based on the Visconti Hours – Kaydian’s is LF 155 and Cassandra’s is LF 153.

I wanted to take a moment and show how I prep scrolls for mailing, in addition to showing this pair side by side (which is why I haven’t blogged about Cassandra’s yet). Pics and more after the break! 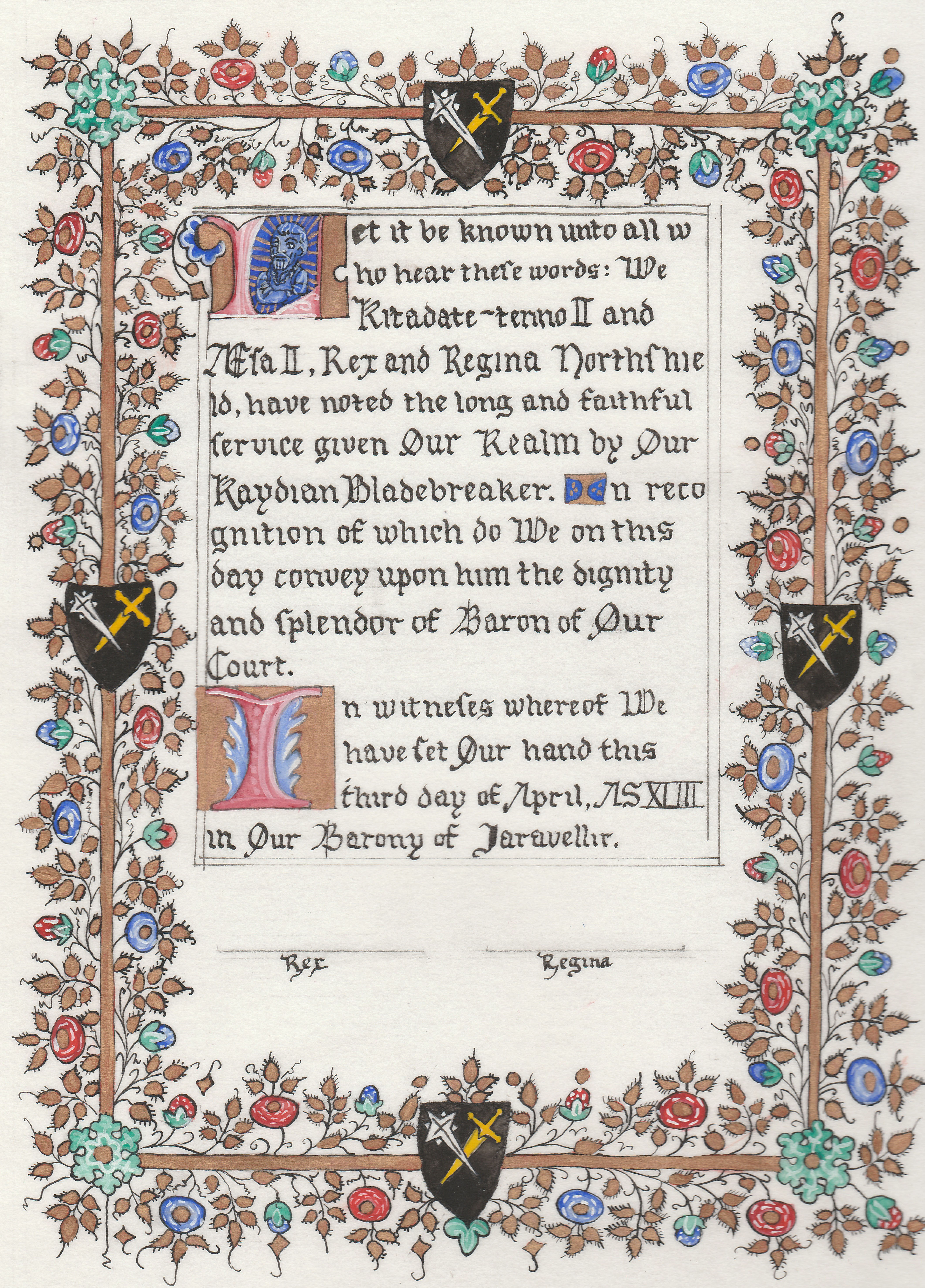 So a quick word about these two – I’m happier with the border on Cassandra’s, but I like the historiated initial and calligraphy in Kaydian’s better. Go figure. Visconti was fun, but I may be taking a break from the denser borders for awhile, simply due to my normal scroll turn-around time being a couple of weeks (not several months). These are both 9×12″ pergamenata using Windsor Newton gouache, crow quill and Black Star ink, and a Manuscript cartridge pen.

Before I do anything, I make sure to get my name and the source information onto the back of the scroll in pencil, hidden behind a border or an initial if I can.

I also try to remember to write this information down somewhere other than on the back of the award.  Because it is awesome to let the recipient know your sources, but when you go to upload a picture of the award to wherever after it has been given out and you can’t remember the folio or the manuscript shelfmark… yeah. I’ve been there. It sucks. So to help solve this problem, I made the Quick and Dirty Scribal Documentation Slip. Someday I’ll get even fancier and figure out how to get them printed as a little notepad, because that would be really nifty.

I’ve sometimes filled these out in pairs and put one with the award, but I didn’t for this one. Also, especially for an award that isn’t a backlog, I will write out the award text on a large post-it note and stick it to the back of the scroll, just to be nice to the herald.

I am a big fan of the clear plastic art bags you can find in hobby stores. They come in different sizes and have a flap with a resealable sticky strip. The scroll goes into one of these bags, along with cardboard to keep it rigid. 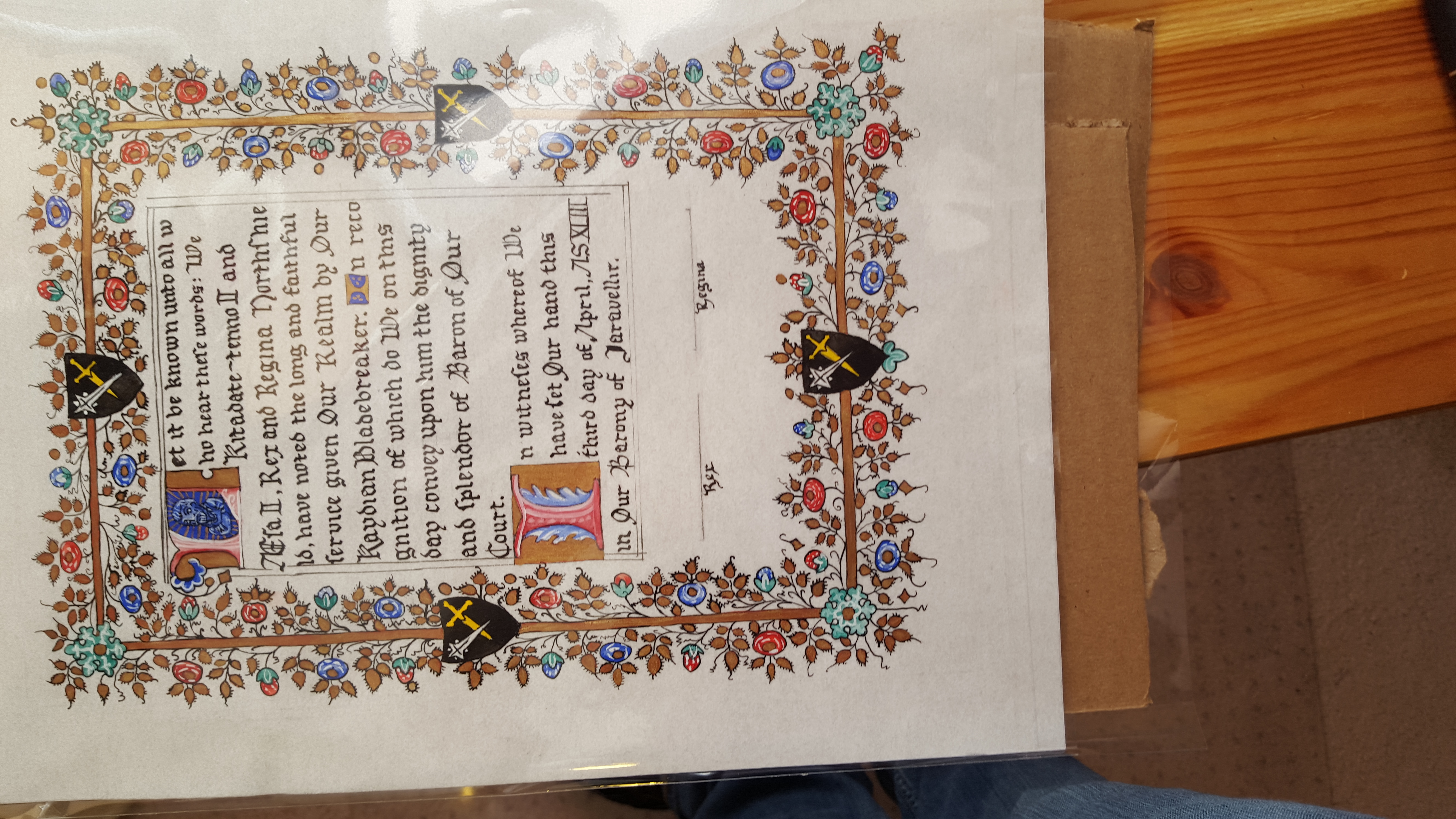 I had to use two overlapping pieces of cardboard for this one, since I didn’t have a bit large enough. I have been using scraps since we have had a plethora of boxes after moving twice in one year, but I am considering getting some pre-cut 9×12″ sheets – and maybe some smaller ones too. I should point out that when I mail smaller scrolls, I still use the big bag, but I fold it over and secure it with some Scotch tape. 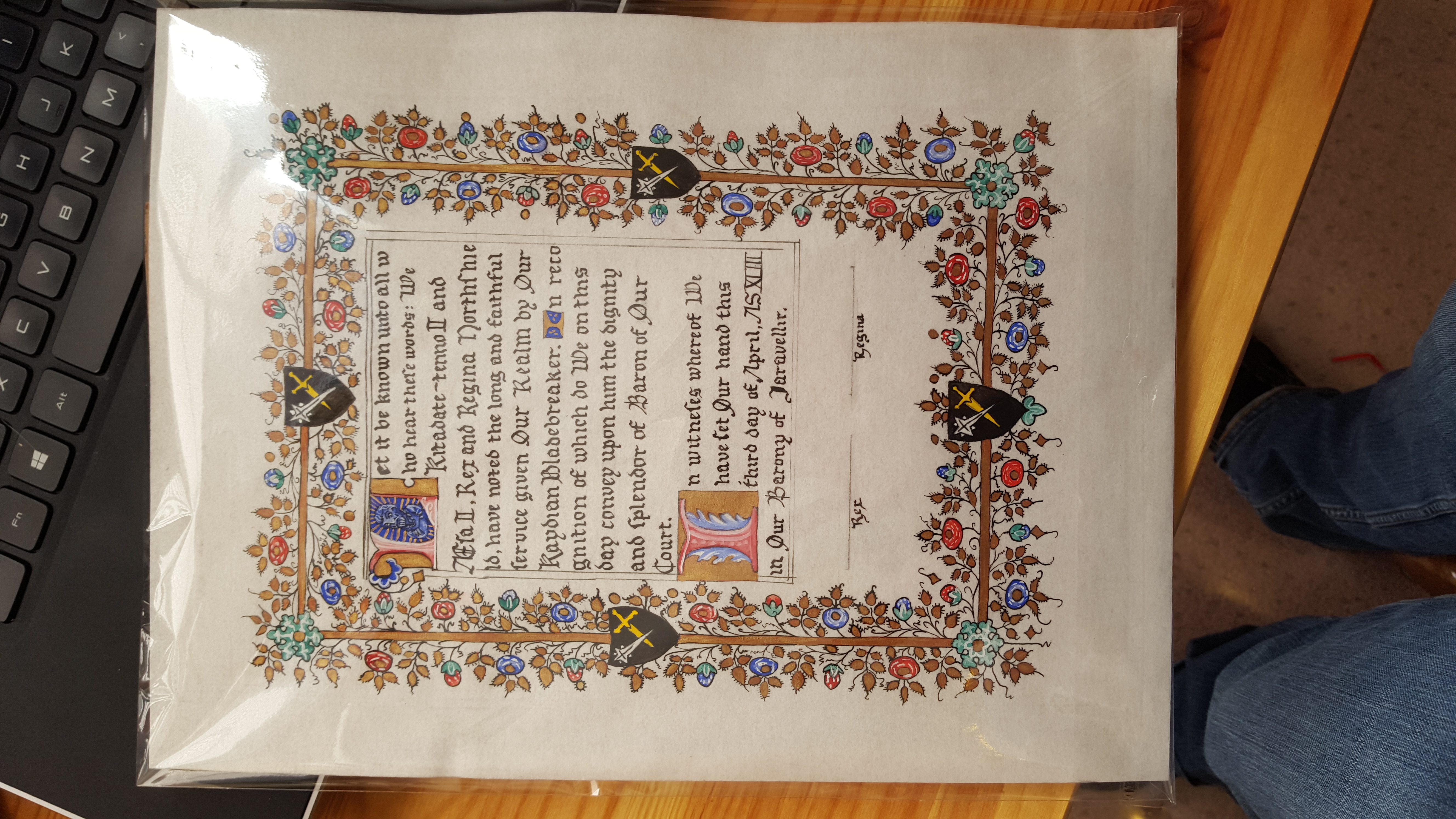 So here it is all closed up and ready to go into an envelope. I ship all my scrolls using USPS Priority 2-Day. This means that, if it is down to the wire, I can get scroll to someone before they head out of town on a Friday if I ship it by Tuesday. I use the Flat Rate envelopes that are 9.5×12.5″, so there isn’t a lot of wiggle room. Larger scrolls mean I have to use a bigger envelope, or one of the skinny boxes. Regardless of the packaging, I always write ART – PLEASE DO NOT BEND in big red letters on both sides. I keep a red permanent marker in my car just for this purpose.

If you’ve been worried about sending a scroll via the mail, I hope this helps you. The right kind of careful packaging will help ensure that it reaches its destination safely.

One thought on “Visconti Baronies and How I Ship Awards”