How about instead of doing persona name research I just sit here and cry because it is 100% as effective.

I had a name. But I have to add stuff to it and possibly shift my time to accommodate it. But I don’t know for sure yet, I still have to talk to herald so they can make me cry.

Seriously, though! I’d be more than happy to help you find stuff.

I would look at royal lineages or “Trees of Jesse.” If you’re more interested in showcasing someone’s arms, then search “roll of arms.”

Here’s an early 14th century “Genealogical Roll of the Kings of England”: [Link]

Here’s a chronicle with some genealogies from the last part of the 15th century: [Link]

This 12th century manuscript has a “tree of consanguinity” (blood relations): [Link]

I’d also encourage you to search the Bodleian library for “genealogy” or “roll of arms.”

This might work too – this is from the British Library’s Stowe 594 (c. 1430-1440), f. 7v-8r. It shows Edward III and Henry, Duke of Lancaster, of the Order of the Garter. They are wearing their own arms on a surcoat, plus the mantle of the order, and they are standing next to the arms of their successors in their Garter stalls (I’m not sure what that means, but there you go): [Link]

So I’m working on figuring out my SCA name and have narrowed it down. I’m definitely using Anne as my first name, but I’m having a harder time pinning down a byname/surname. I’m going to be mainly playing Norman Conquest through the Anarchies England, so am thinking of using a French name.

Beaumont (I like the way it sounds)
D’arcy (Yes, I’m a giant Jane Austen P&P nerd.)
LeRoux (I’m usually a redhead so I kinda want to incorporate that into my persona)

LeRoux: Couldn’t locate a St. Gabriel or SCA Heralds article, but it looks like it has been registered before as a 15/16th century name.

So the good news is that all of these should be documentable. Search through OSCAR to see what documentation others (who got the name passed) used.

I can certainly try to find some! 😀

First of all, as with any heraldry/name related question, I highly suggest consulting heralds either at an event’s Herald Consultation Table or on the SCA Heraldry Chat Facebook group. Heralds don’t bite. Promise!

Names
The SCA Heraldy page has a some article on 14th Century names for England, but they are specific to the county:

The Academy of St. Gabriel has some naming guides for 14th century English names, but it only goes to 1450. It looks like they have a lot of good stuff here – plenty to help you narrow down and make a choice.
[http://www.s-gabriel.org/names/eng1300to1450.shtml]

You could also search their past reports for “14th century England,” but I would suggest narrowing your location to a county/region first, because it pulls up a LOT. You can use the search on their front page, or look at all the reports here: [Link]

Books: Consult with your local heralds to see if someone already has a copy of one of these on hand, otherwise, you should be able to Interlibrary Loan them at your local library. For those that have a Google Books preview (at least), I’ve included that link as well.

A Dictionary of English Surnames (1991), by Percy Hide Reaney.
Publisher’s Description: This classic dictionary answers questions such as these and explains the origins of over 16,000 names in current English use. It will be a source of fascination to everyone with an interest in names and their history.
Worldcat (See what libraries near you have it) [Link]Google Books [Link]

The Oxford Dictionary of English Christian Names (1977), by Elizabeth Gidley Withycombe.
Publisher’s Description: Presents the early forms of common names, their equivalents in other languages, pet forms, and etymologies together with historical backgrounds.
Worldcat: [Link]

Heraldry
You’re right – this is harder than names. London’s civic arms date back to about 1380, and the earliest reference to the officer of arms at the College of Arms is 1334. You can read more on the Wikipedia page: [Link]

In the 1390s, Johannes de Bado Aureo published Tactatus de Armis, but the only versions of it I can locate are outside the 14th century window. It’s unlikely the text changed much, since it took so long to make a book.
De arte heraldica, by de Bado Aureo, c. 1440-1450
Bodleian Library Images: [Link]

If we look to non-period sources, there are plenty of English Armorials that list not only the Royal arms, but civic arms, and the arms of the general nobility.

If you compare a source like Burke’s General Armory to something like this list of the Knights of the Garter [Link] in order to date items. Burke’s doesn’t include images – just blazons – but it has a whole section in the front about how heraldry works. And there are other online resources to understand how to decipher a blazon, such as this one on the SCA Heraldry site: [Link]  There is also the official Burke’s Peerage website, which has images – but again, no dates.

The 107th edition of Burke’s appears to maybe have dates associated with each entry, but it is difficult for me to tell given the inability to zoom in on the few preview pages available. The book is VERY expensive, so check your library – [Worldcat Link] It may be that it won’t circulate (given it’s replacement cost), which means it probably won’t be allowed to go out on ILL. But you could see where the closest copy to you is and then have a field trip! 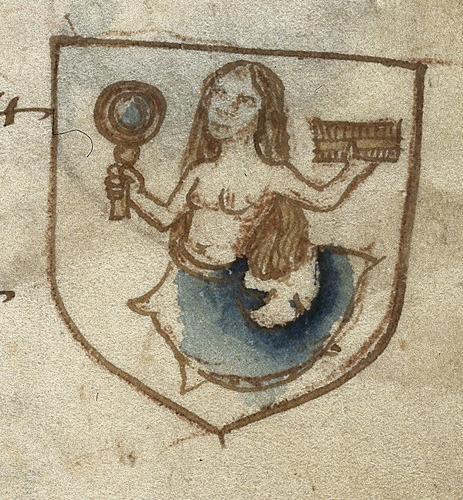