Okay well your professor lied to you.

Actually there were so many Black British at that time that Elizabeth I tried to blame the realms ills on them and have them all deported. Twice. She failed, probably because you can’t deport your own citizens very well under most circumstances. It’s actually a pretty pivotal point in English history.

Here’s one of the letters from her own hand: 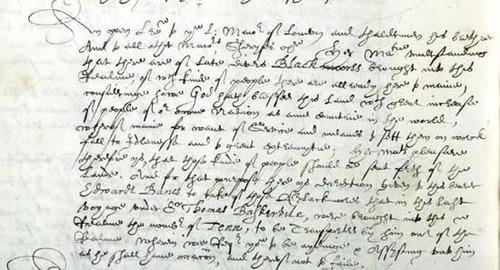 An open le[tt]re to the L[ord] Maiour of London and th’alermen his brethren, And to all other Maiours, Sheryfes, &c. Her Ma[jes]tieunderstanding that there are of late divers Blackmoores brought into the Realme, of which kinde of people there are all ready here to manie,consideringe howe God hath blessed this land w[i]th great increase of people of our owne Nation as anie Countrie in the world, wherof manie for want of Service and meanes to sett them on worck fall to Idlenesse and to great extremytie; Her Ma[jesty’]s pleasure therefore ys, that those kinde of people should be sent forthe of the lande. And for that purpose there ys direction given to this bearer Edwarde Banes to take of those Blackmoores that in this last voyage under Sir Thomas Baskervile, were brought into this Realme to the nomber of Tenn, to be Transported by him out of the Realme. Wherein wee Req[uire] you to be aydinge & Assysting unto him as he shall have occacion, and thereof not to faile.

You can read another one in its entirety here.

Elizabeth I tried to use Black British as scapegoats for some of the problems in English society during the Elizabethan Era, problems that led to the passing of the famous Poor Laws in 1597 and 1601.

From The British National Archives:

But while Elizabeth may have enjoyed being entertained by Black people, in the 1590s she also issued proclamations against them. In 1596 she wrote to the lord mayors of major cities noting that there were ‘of late divers blackmoores brought into this realm, of which kind of people there are already here to manie…’. She ordered that ‘those kinde of people should be sente forth of the land’.

Elizabeth made an arrangement for a merchant, Casper van Senden, to deport Black people from England in 1596. The aim seems to have been to exchange them for (or perhaps to sell them to obtain funds to buy) English prisoners held by England’s Catholic enemies Spain and Portugal.

No doubt van Senden intended to sell these people. But this was not to be, because masters* of Black workers – who had not been offered compensation – refused to let them go. In 1601, Elizabeth issued a further proclamation expressing her ‘discontentment by the numbers of blackamores which are crept into this realm…’ and again licensing van Senden to deport Black people. It is doubtful whether this second proclamation was any more successful than the first.

Why this sudden, urgent desire to expel members of England’s Black population? It was more than a commercial transaction pursued by the queen. In the 16th century, the ruling classes became increasingly concerned about poverty and vagrancy, as the feudal system- which, in theory, had kept everyone in their place – finally broke down. They feared disorder and social breakdown and, blaming the poor, brought in poor laws to try to deal with the problem

As you can see, Black people were a pretty important and pivotal part of English society at the time. Basically, the Queen tried to convince the people that they had to “give up” their cobbler’s apprentices and weavers and other various other workingpeople (the Black musicians in the court were of course exempt from the deportations) to the crown, on the basis that they were “vagrants” and “mostly infidels”. This was not only a wild exaggeration (most were Christian with working class jobs like ya do), but it’s not a very compelling reason to frigging report your next-door neighbor Bill the Mason to immigration. Because then who’s going to do your masonry?

So anyways, the Poor Laws had to be passed, because you can’t deport your citizens/workforce and no one would cooperate with something like that.

And it’s not like those people went anywhere. They’re still there. They were there before that! Some had been there since like, the 4th frigging century when that was part of the Roman Empire!

Also check the tag for England here. Plenty more on lots of different people of color in England throughout many eras.

* this generally refers to the “master” of a workshop or guildmaster, not necessarily the master of an enslaved person, FYI.

oh my god how is this something i never learned about in three separate elizabethan era-focused classes??? (no need to answer; i know how)

Like, I thought my capacity to be disappointed in history education was full, but I guess not.

Seriously, the next time someone sends a message about how this is stuff “everyone knows” remind me to link this.

Reblogging this for the last five people who asked me if there are enough people who don’t know that POC lived in Europe in the past to “justify” Medievalpoc’s existence….

Because sometimes those people are your professor. Or someone who took three Elizabethan Era focused classes. Because I think everyone should know these things, whether you’re a history fan or not.

Reblogging because this is some awesome research. <3

Queen Elizabeth’s Wardrobe Unlock’d is being reprinted as a paperback ($69.26).

Full Title: Queen Elizabeth’s wardrobe unlock’d : the inventories of the Wardrobe of Robes prepared in July 1600, edited from Stowe MS 557 in the British Library, MS LR 2/121 in the Public Record Office, London, and MS V.b.72 in the Folger Shakespeare Library, Washington DC

Publisher’s Description:  The vast wardrobe of Queen Elizabeth I is legendary: in her own time some of the richly embroidered gowns were displayed with other treasures to dazzle the eyes of foreign visitors to the Tower of London. The quantity of clothes recorded in the inventories taken in 1600 would seem to suggest sheer vanity, but a survey of work carried out in the Wardrobe of Robes throughout the reign reveals a different picture. It is one of careful organisation and economy. This copiously annotated work is illustrated with photographs of portraits, miniatures, tomb sculptures, engravings, woven textiles and embroideries. Two indexes are provided, the first of paintings, persons, places, and events, while the second, partly a glossary, enables the reader to quickly trace information on fashionable dress and accessories. An invaluable reference for students of the history of dress and embroidery, for social historians, for art historians working in the field of portraiture, and those with a general interest in the period.

Don’t want to buy it? See what library near you has it! (Or ILL it from your Friendly Neighborhood Reference Librarian.)