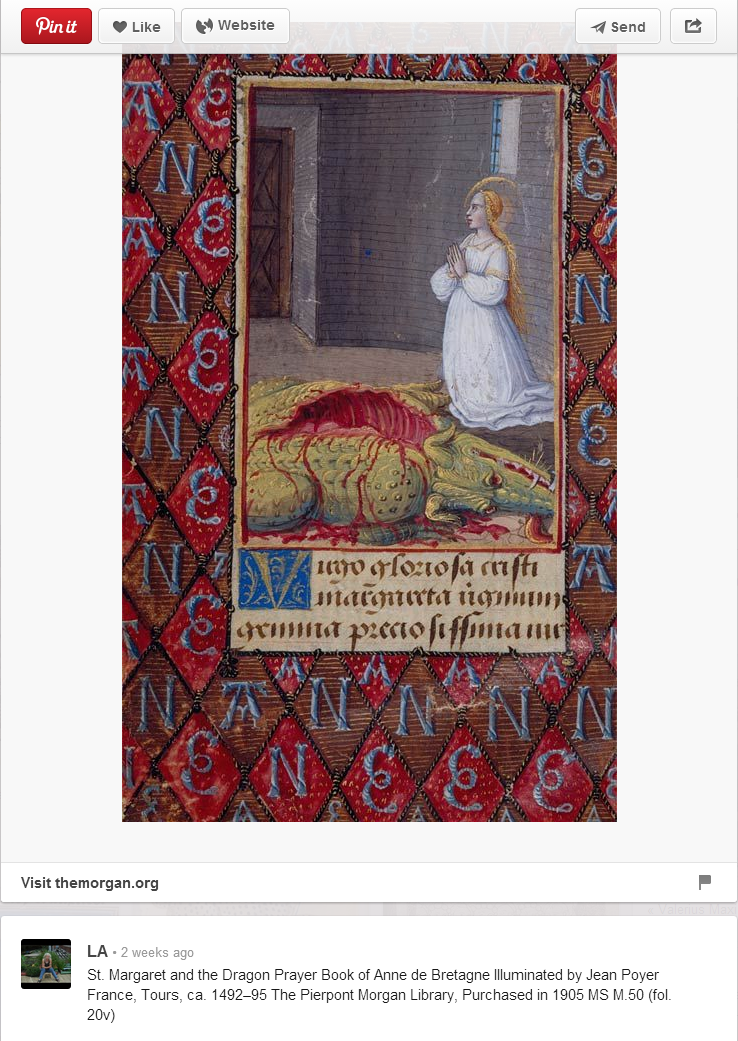 Title? Check. Creator? Check. Location? Check. Period? Check. Current residence? Check. Shelfmark? Check. Folio reference? Check. Link to where the digitization actually lives online? (Not the best example, since it only appears to show this image as an exhibition teaser.) Yes! I can re-pin this without any niggling brain-feelings. 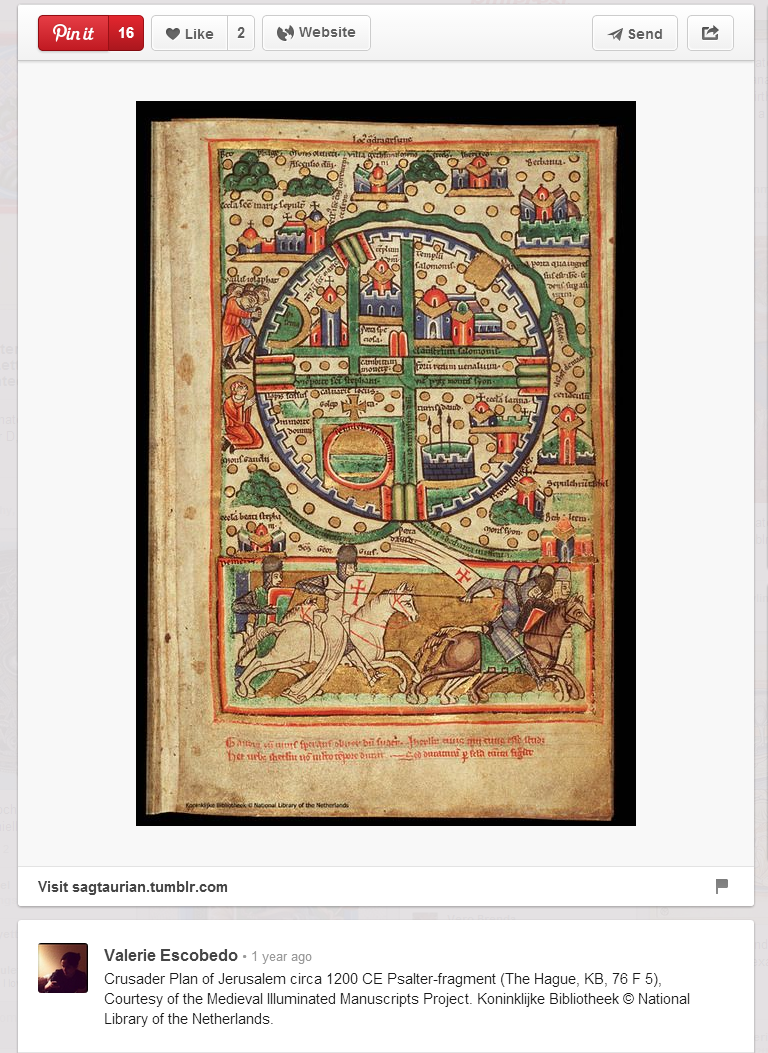 Valerie, you make my heart sing! Sure, the link for this pin is broken (it takes me to a Tumblr error page) – but that’s okay! You’ve included enough information that I can cite with confidence. I have a shelfmark! I have a folio reference! That means that after a super fast Google search, I have the National Library of the Netherlands’ webpage for this item, which includes this image as well as several others.  When I re-pin this, I’ll include that link for my own easy reference. But I might be lazy and not do it, since it’s so easy to find.

The Bad, But Serviceable 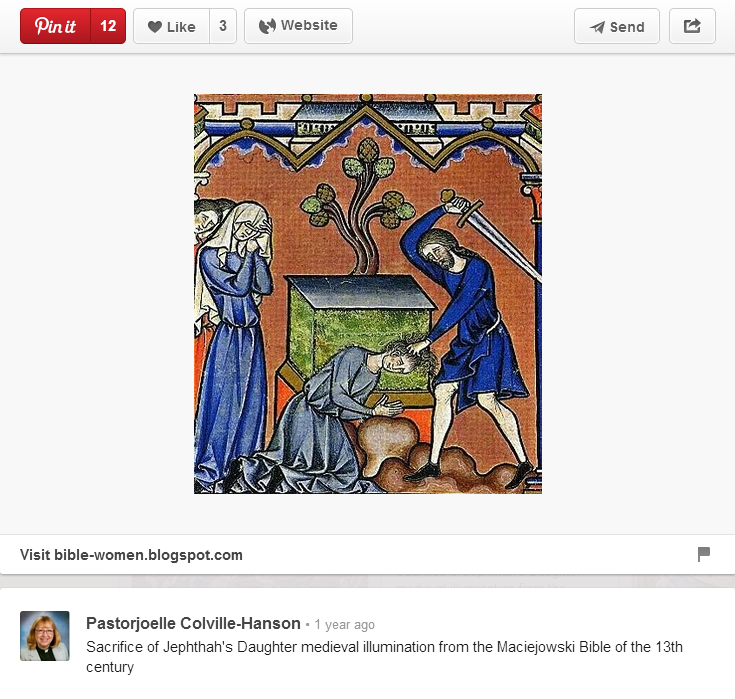 Okay, Joelle, your pin links to a blog where you give pretty much no additional information about this image.  But while you didn’t give me a shelfmark and folio reference, I can still probably figure this one out. The Maciejowski Bible is also known as the Morgan Bible, or Ms. M. 638 2.  I could go to the Morgan Library and leaf through all the pages until I find the one that has this miniature, but why would I? A quick Google search for either “Morgan Bible Jephthah’s daughter” or “Ms. M 638 Jephthah’s daughter” gives me this lovely article about Jephthah and his daughter in medieval art. A Ctrl+F for “Morgan Bible” gives me this citation:

So it can be assumed that the sacrifice of Jephthah’s daughter is depicted in the Morgan Bible on folio 13v. But it’s not a bad idea to check 3.

Do I want to go through all that work to find out where a pinned image from a manuscript is from?  Not really.  Will I? If I really want to use it, yes. But I’m weird about putting citations on the backs of my scrolls.  Still, if you’re pinning (or repinning) images, it’s always nice to make it easier on yourself and others and include at least enough information to lead someone (including yourself) to the source material.  After all, that’s what a citation’s supposed to do, and what is a description if not, in part, a citation? 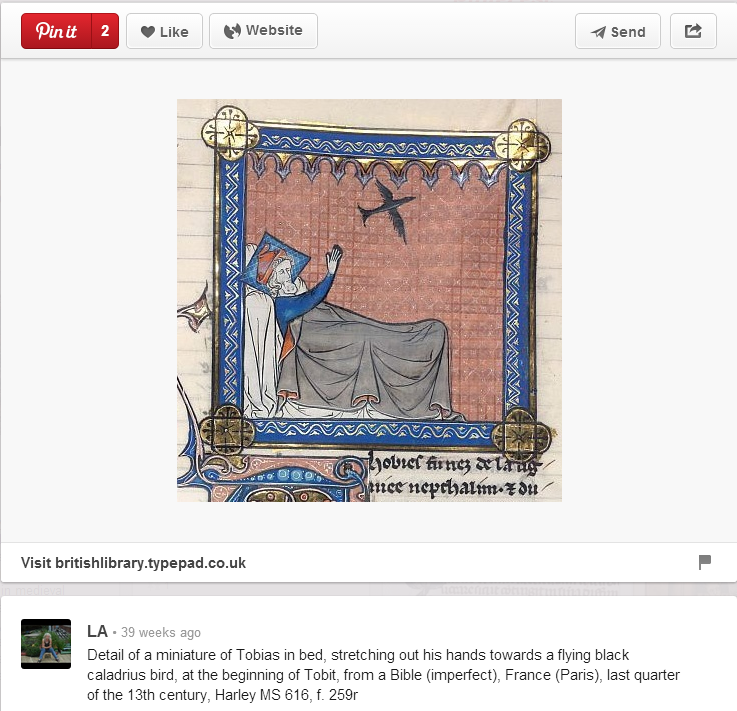 LA is really good about including lots of detail in the description. I could run out and find this really quickly. However, this pin falls victim to one of the classic Pinterest blunders – pinning from a blog and not pinning from a specific post ON that blog.  When I click on this image, I go to the excellent British Library blog of Medieval Manuscripts 4  But it takes me to a massive page with all their posts from April on it. Wonderful. Now I have to do a Ctrl+F to search for the shelfmark and find this actual image.  Why would I do that rather than just search for it in either the BL:CIM or Google? Because the BL blog is really great about linking to their holdings. 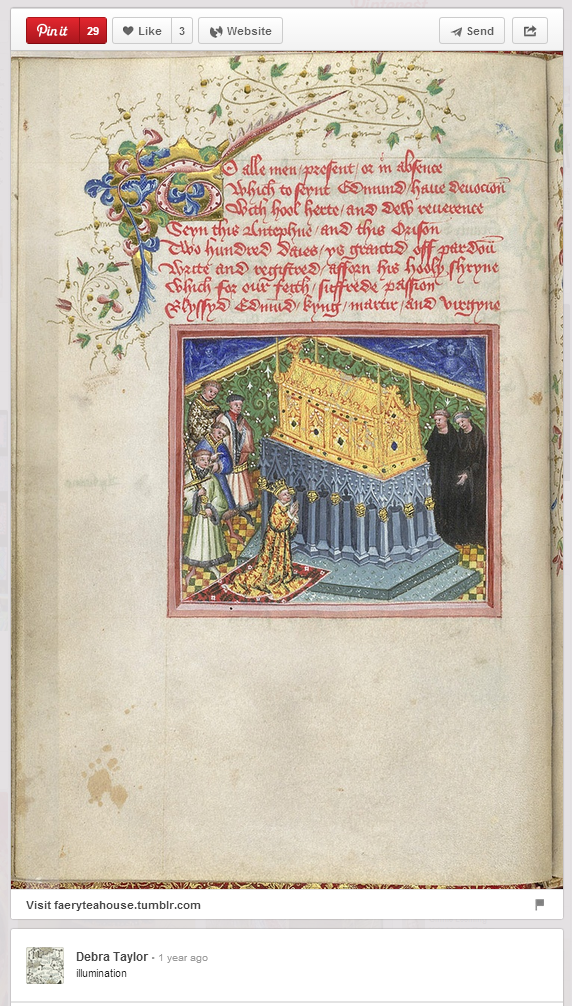 Uh-oh. Non-descriptive pin. I mean, I searched “illumination,” so the only reason why this gorgeous thing showed up was because that’s ALL Debra gave us! The reason why this is Bad, but Serviceable rather than Ugly is that when I click on the pin, I go to a Tumblr that, despite a deceptive title, is pretty decent when it comes to including the citations from the original Tumblr blogger. Though I would not have known that from the “Faery Tea House” moniker.  This is: John Lydgate, The Lives of Saints Edmund and Fremund. Miniature of Henry VI kneeling before the shrine of St Edmund. British Library, Harley 2278, f. 4v. 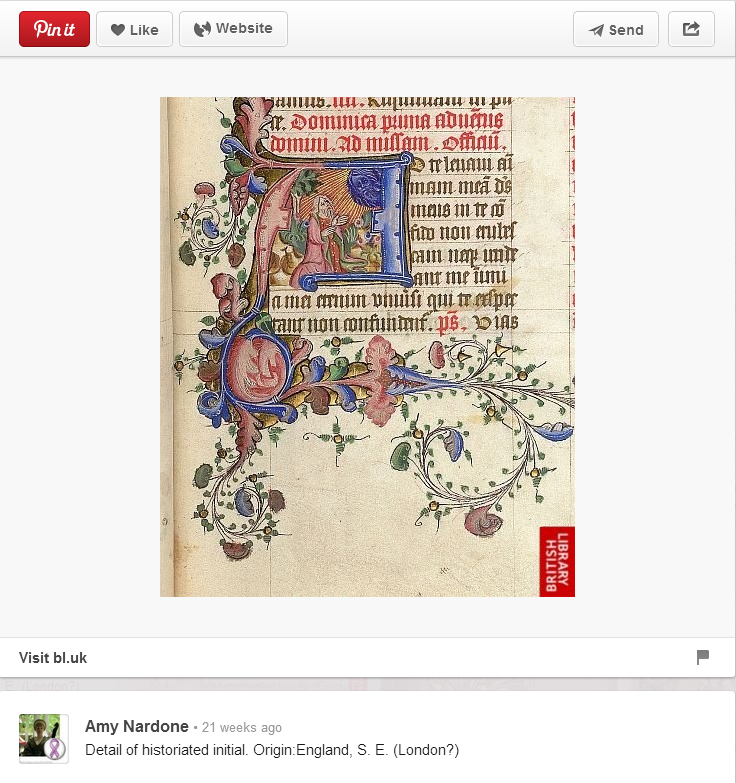 No citation, apart from origin. Tsk, tsk, Amy! You’re lucky that you pinned this from the British Library (bl.uk is the giveaway), and I can get the full citation quickly. Arundel 109, f. 8.  When you’re pinning from a source like this, including the shelfmark and folio is super easy, and honestly? I think it’s more important to know the citation information than the fact that this is a detail image of a historiated initial. 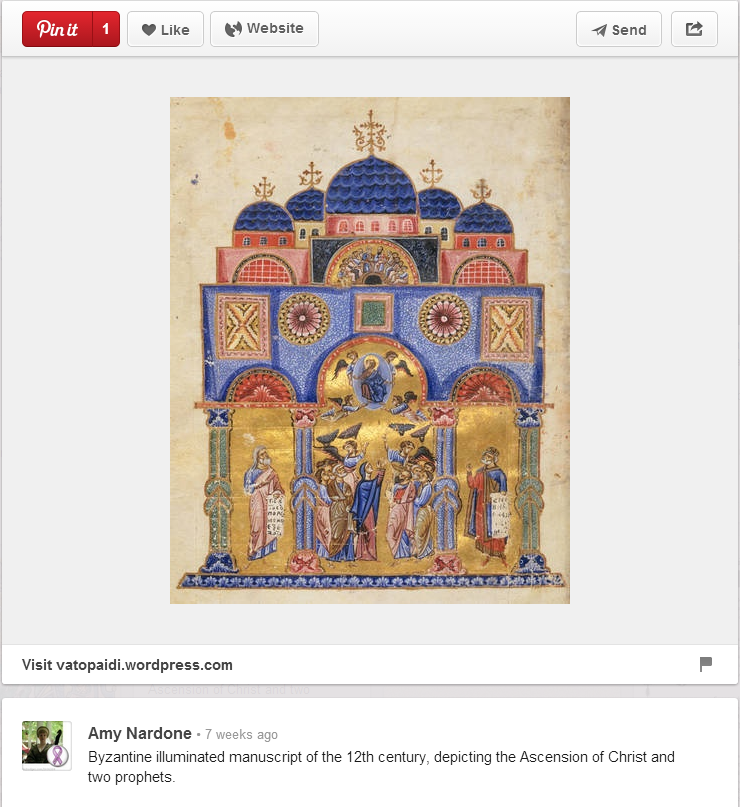 Here’s a scenario: you find this really cool image from a Byzantine manuscript, but you need to know what the text in the rest of the manuscript looked like in order to turn it into a scroll. (Unless you want to try to fit it on the two scrolls the figures are holding, which would be really awesome but whoa, buddy.)  Amy doesn’t give us much to go on. We know the location and general period, as well as what’s happening in the image. When I click on the pin, I go to a blog…which doesn’t give me anything more.  It would take some serious digging to find out what this image is from, and that’s an effort I do not want to undertake without additional information at the onset. 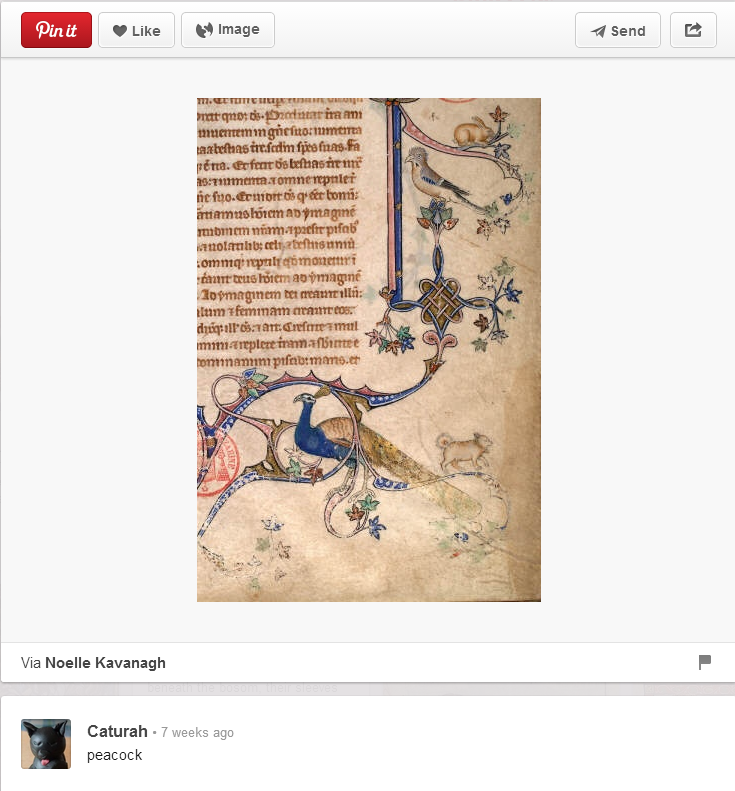 Leah’s Rule to Responsible Pinning Number I-Lost-Count: If you see a pin that says “Via So-and-So” in the source line, it has NOT been responsibly pinned! That pin goes nowhere. That is a pin that someone uploaded. For things like images of work you’ve done, this is fine. For sources to manuscripts? This is not fine – especially when there is no citation information given.  You might be able to track down whatever the original person pinned by clicking on their name, but that just takes you to their boards.  Which means you’d have to guess where they pinned it. It quickly becomes a wild peacock goose chase. Which is sad, because that peacock is really pretty. 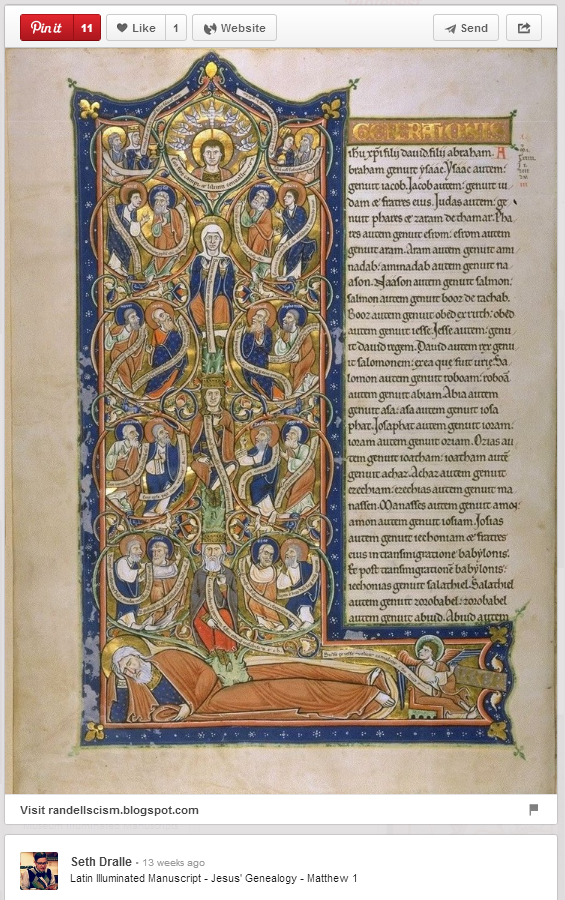 This is a great example of a Tree of Jesse in a Romanesque manuscript.  Unfortunately, we don’t have a title, year, or anything to go on. I can tell it’s Romanesque based on the title, the Tree of Jesse motif, and the script used, but a date and location would certainly solidify this.  The link goes to a blog that doesn’t give any additional help – not even in how they named the image. Irresponsible bloggers! Irresponsible pinners! Yes, I could search various library catalogs for Trees of Jesse in the Romanesque period, but believe me – I’d get a ton of results I’d have to comb through.  It’s just not worth the time.

I realize that we’re not all perfect. We all have those lazy days where we just want to look at pretty pictures. But please – when you’re pinning, take a moment to investigate the pin before you hit the Pin it button – whether you are pinning something you found on the web or re-pinning something from someone else.  Make sure that it has adequate information in the citation. Trust me – you’ll make your life as well as the lives of others much easier down the road.