On July 10, the Bodleian Libraries at the University of Oxford launched a new site for their digitized manuscripts. These were viewable before in a couple of different interfaces – one had frames, and was very not user-friendly.  I’ve written about the LUNA interface already. The LUNA is still there, and shows up as the third Google result when I search “bodliean illuminated manuscripts.” This may be because I use the LUNA quite a bit.

This is going to be an overview of the new site, with the caveat that it only recently launched, and it may be that some features are simply not yet available.

END_OF_DOCUMENT_TOKEN_TO_BE_REPLACED

One of my all-time favorite places to browse for illuminated manuscripts to use either as a resource or just inspiration is what I call Bodley’s Luna, or the Luna.  This is just my own title for a collaboration between ARTstor (more on them later) and the Bodleian Library at the University of Oxford.

My first piece of advice is to bookmark this website.  It’s not an easy URL to remember. You could just do a Google search for “bodley luna” whenever you want to pull it up, but it’s worth just bookmarking.  I’m not going to go over how to “search” the Luna, but I will highlight some of my favorite features.  I highly encourage you to poke around with it. It’s just too fun! 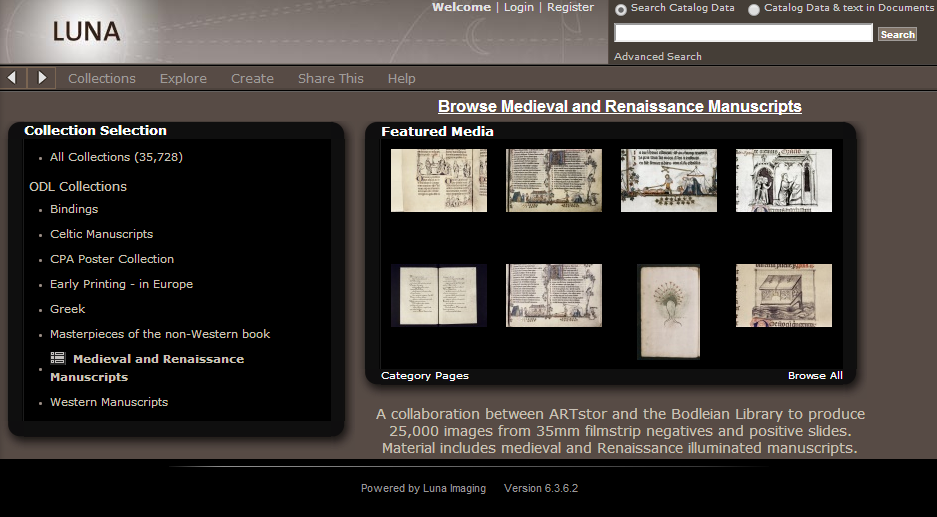 END_OF_DOCUMENT_TOKEN_TO_BE_REPLACED

So the British Library is in the process of phasing out one database of digitized manuscripts,  Digitized Manuscripts site (DM), in favor of another,  Catalogue of Illuminated Manuscripts (CIM).  This post is going to focus on searching the DM.

Before we get too far in here, remember that you’re not going to find everything in the DM.  The only things that can be found here reliably are the Cotton manuscripts – that is, any manuscript with the word “Cotton” in the shelfmark. So, the Lindisfarne Gospels, AKA Cotton MS Nero D.IV, are going to be in the DM.  Also note that the DM is being tinkered with because it is going away, so don’t be surprised if things don’t load correctly or you get an error.

END_OF_DOCUMENT_TOKEN_TO_BE_REPLACED

For whatever reason, there are two ways to search the British Library’s vast collection of digitized manuscripts. One is via their Digitized Manuscripts site (DM), and the other is via their Catalogue of Illuminated Manuscripts (CIM).  There are some items that are in one site, but not the other.  For example, the Cotton Manuscripts (the library compiled by Sir Robert Bruce Cotton, 1571-1631, which includes the Lindisfarne Gospels) is only available in DM, whereas the Harleian manuscripts are in the CIM.  I have run into issues in the past with searching the DM – I often get an error page, which may mean that the DM is getting phased out in favor of the CIM.  I think this is the case, given the wording on the CIM’s “About” page:

Manuscripts included in the Catalogue:

PLEASE NOTE: manuscripts in the Cotton collection are not yet included in the Catalogue.