Door number two is Facebook. Generally, we get an SCA as well as a mundane name in the information from the signet, so I search for the mundane name and pay attention to location and if I have any mutual friends that pop up.  If this is a “go fish” moment, then we go to door number three.

Door number three is Oscar.  Oscar is the commentary and response website for SCA heralds who process and respond to name and heraldry registrations.  If a recipient has been in the SCA for a reasonable length of time, chances are they have registered their name.  You don’t have to log in to search Oscar, so pop the SCA name into the search bar using copy/paste.  A search for my registered name, “Leah of Schattentor” retrieves the following result:

If I click on the “New Name” entry, I get more information about that specific request.  If I had a name that was specific to a culture or time period, it would be listed in the herald’s notes.  This isn’t always super helpful, since it depends on what the herald wrote on the form.  Generally, though, it’s better than nothing.

If all else fails, I resort to Scribal Spying.  This is basically finding someone I know who is in the same home group or barony as the recipient and asking them for information about the person.  I make sure these folks are pretty savvy when it comes to staying hush-hush about scribal stuff.  Generally though, I figure if you’re going to be friends with a scribe, you’re going to understand that you may be called upon to be a Scribal Spy from time to time.  Or maybe it’s just if you’re friends with me.

Okay! So for this example, I found out that my recipient’s persona is 14th-16th century Flemish, based on the information Oscar. Specifically, their name is 16th century Flemish.  My go-to Flemish manuscript is the Romance of Alexander (MS Bodl 264 pt. 1), which is mid-14th century.  It’s a style that I am really comfortable with, but something tells me that this particular person leans more toward the 16th century. Why? Both of the references in Oscar for their name documentation are solidly in the 1500s.  On to the Bodley!

For this kind of searching, I go directly to Bodley’s Luna. (You can read my post about how to search the Luna here.)  I go to Flemish manuscripts first, then I narrow my search by century. For this one, I’m going to stick to the beginning of the 16th century, since the Bodley offers this distinction and I’m still not super comfortable with incredibly late period illumination.

Now it’s just a matter of finding something that would be easily adaptable to a scroll, keeping in mind the recommendation and the level of the given award.

I’m not opposed to using multiple images as sources, so long as they are from the same manuscript, or are within the same rough time period. This is inspiration, after all! Try as I might, I’m not going to be able to make an absolutely perfect rendition of the original art. Nor would I want to.  That’s not what a light table is for. 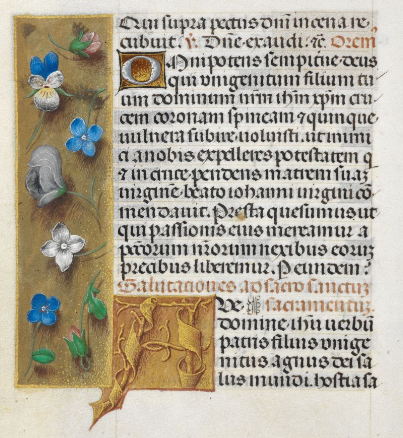 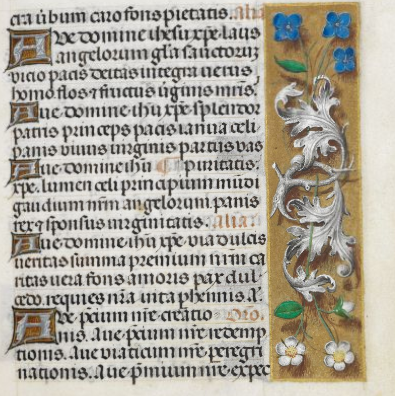 EDIT: I ended up using the large gold initial A and the panel with the white branch/leaves.  Since my source images were on facing pages, and our SCA scrolls are generally a single page, this is a liberty I feel fine taking. After all, this is a inspiration – not a reproduction attempt.  (Look for another edit soon with the finished scroll!)

How do you go about finding inspirations for your scroll assigmments?

One thought on “My Process – Choosing Inspiration”