Okay, so to start, these are pretty fun. They look like starfish!

A wild hennin has appeared!

I looked in Google Books for henins*, and the only references to the “triple-horned” variety seemed sketchy – meaning they didn’t have citations.  it looks like the origin of this image and concept is from a variety of ladies journals from the 1880s. Yay Victorian myths about 15th century clothing.

But just in case, I reached out to a newly-minted Laurel who is known for her hats. She didn’t know of anything, nor could she find any solid research for this type of hat.

It looks like we’ll have to keep looking for ideas for 15th century Staryu cosplay.

*Google Book is a great place to start research, by the by, since it searches the full text of a book, whether you can see those scanned pages or not. It helps you refine terms and points you toward possible sources. I kind of adore it.

My hat is off to you as you continue your research into fancy headgear.

The Three Living and the Three Dead, or the Three Dead Kings, is a poem dating back to the 13th century. It, or imagery from it, is often used to open the Office of the Dead in books of hours. Perhaps because medieval skellimans are pretty cool.

You can read the poem in Middle English, with footnotes.

You listen to the poem (after a longish intro).

You can read the British Library’s blogpost on the poem and the imagery in manuscripts.

Creative depictions of consorts from the Babenberg Family Tree, a triptych created by Hans Part between 1489 and 1492. See more images here.

I selected a couple of my favourites to see if I could identify them. Some were easy but others posed more of a challenge! Here was what discovered about this small selection:

Described as Mechthild (Matilda), wife of Ernst of Austria. However, Ernst’s two wives were called Adelaide and Swanhilde.

Born 1115 – Died 1143
Margravine consort of Austria and Tuscany and Duchess consort of Saxony and Bavaria.
More

Incunabula are books that were printed in the early days of the printing press in Europe, from the 1450s to the end of the 15th century. Because this technological advancement came when books were still hand-copied and decorated (manuscripts) the typography and decoration was designed to mimic their more time-intensive predecessors. Because that’s what books looked like, you know?

The Dialogus creaturarum optime moralizatus (or, Dyalogus creaturarum moralizatus) is a collection of 122 fables in Latin and conversations of creatures. It was the first book ever printed in Sweden, in 1483 by Johann Snell. Five copies of the original printing survive today.

From Wikipedia: The fables are organised in sections according to the different kinds of protagonists: first the astronomical, then the elements, followed by living things. The fables tell of the interactions of various anthropomorphized animals and ends with a moral explanation. Common human problems are solved according to the teachings of the Bible, church fathers or classical Greek or Roman philosophy. The author is unknown, but surviving manuscripts suggest the fables may have been gathered and edited by either Mayno de Mayneri (Magninus Mediolanensis) or Nicolaus Pergamenus, both active in the 14th century. A number of the fables are from Aesop, such as The Lion’s Share, The Frog and the Ox and The Wolf and the Lamb.

The first English edition of Dialogus creaturarum was published in 1530.

And, because of the ones I have found in English so far, this is my favorite:

About the Monkey who wrote Books: Dialogue 97

Symea, a monkey, used to write the most beautiful of books; but he was never completely whole-hearted about what he was doing. He would rather talk with other people, or listen to what they were saying, and because of that he used to spoil his books by writing in them what he was saying, or what he heard the others say. But since he refused to improve himself, no-one would offer him any work, and from his poverty he said:

– “Nothing the scribe writes will have its effect if it is not meditated in the heart.”

You can see more here (with citations): http://bjws.blogspot.com/2014/02/illuminated-manuscripts-women-artists.html

So what do we consider late period? The latest I could find was late 16th century, but the majority was 14-15th.

For search terms (in the image description field of your favorite manuscript database, try “genealogy.” That seems to pull up the most results.

Here are some highlights: 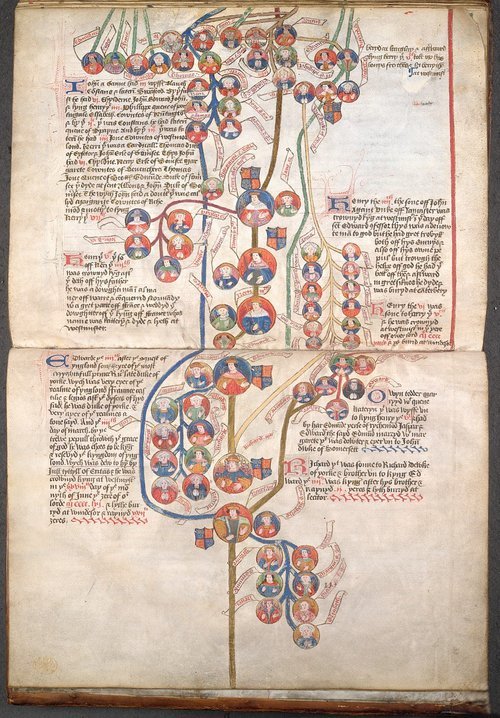 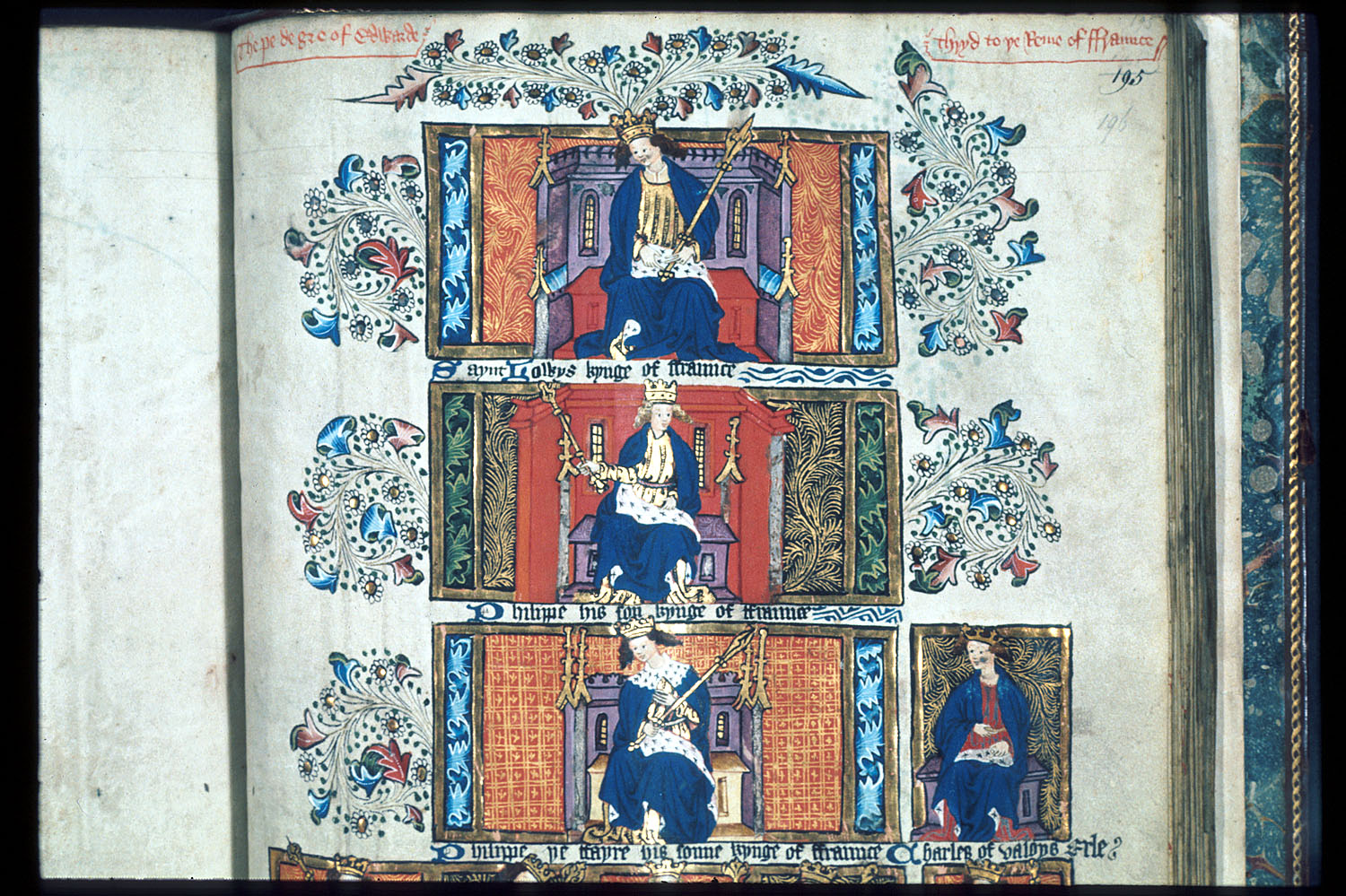 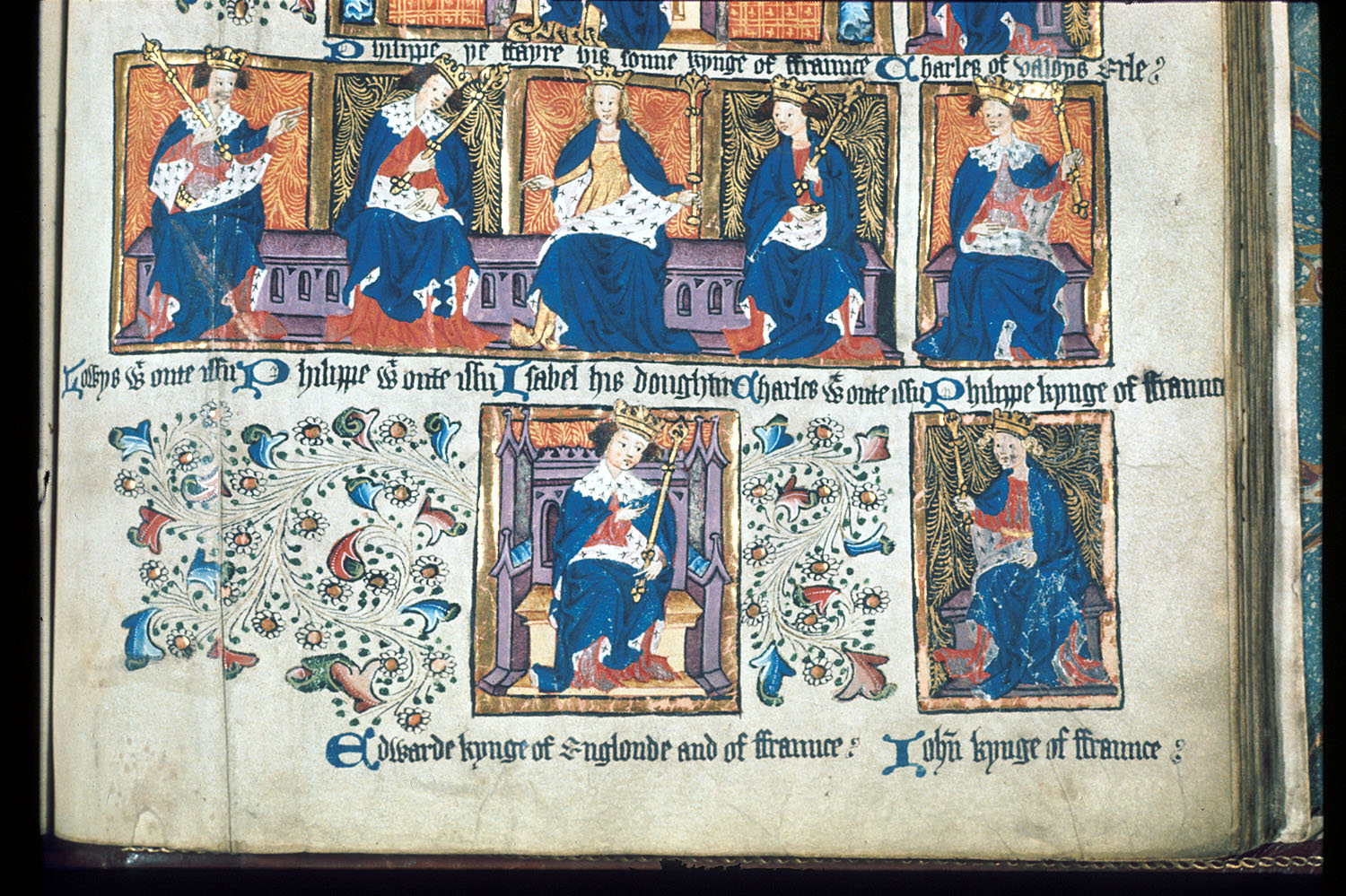 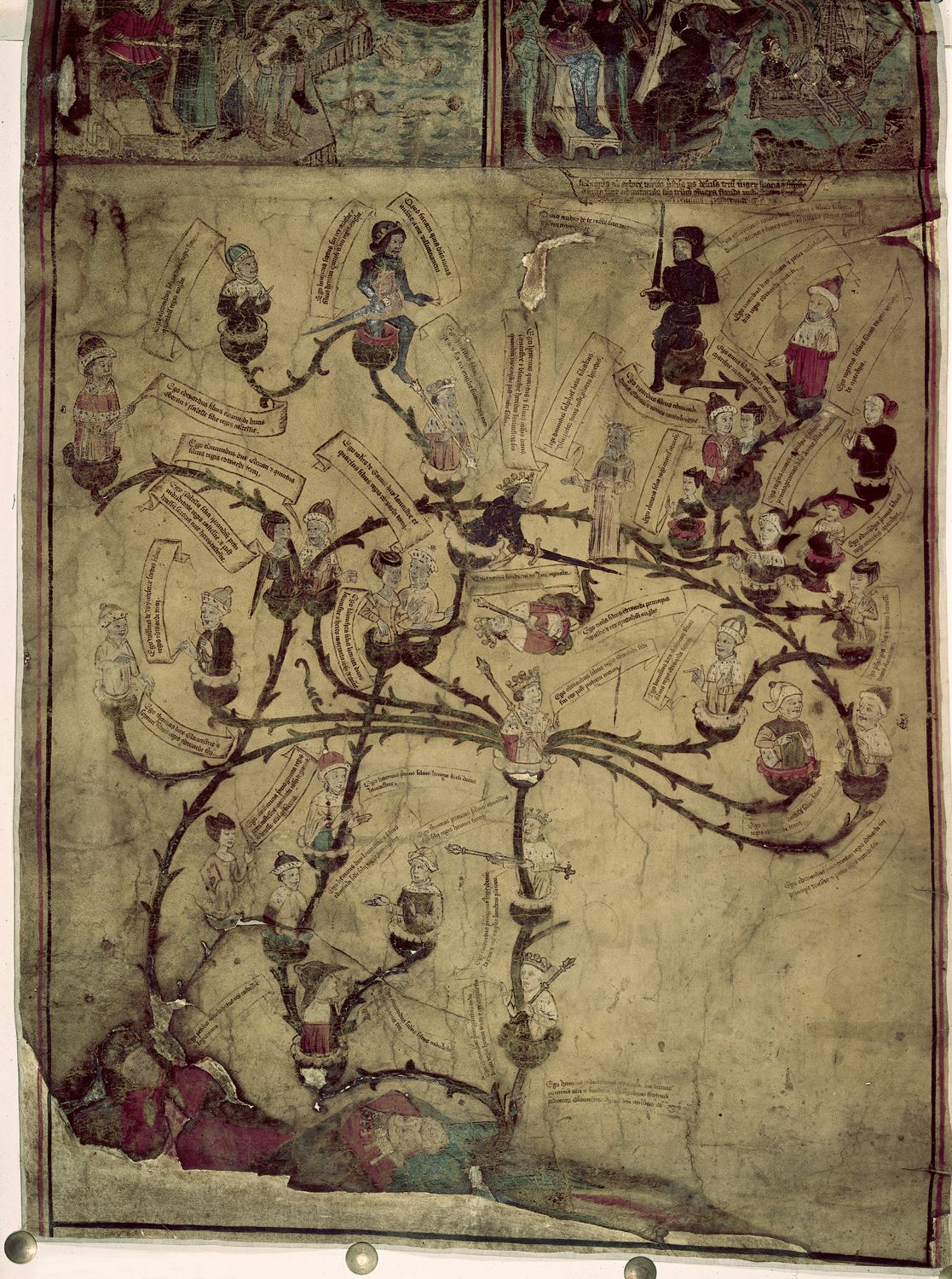 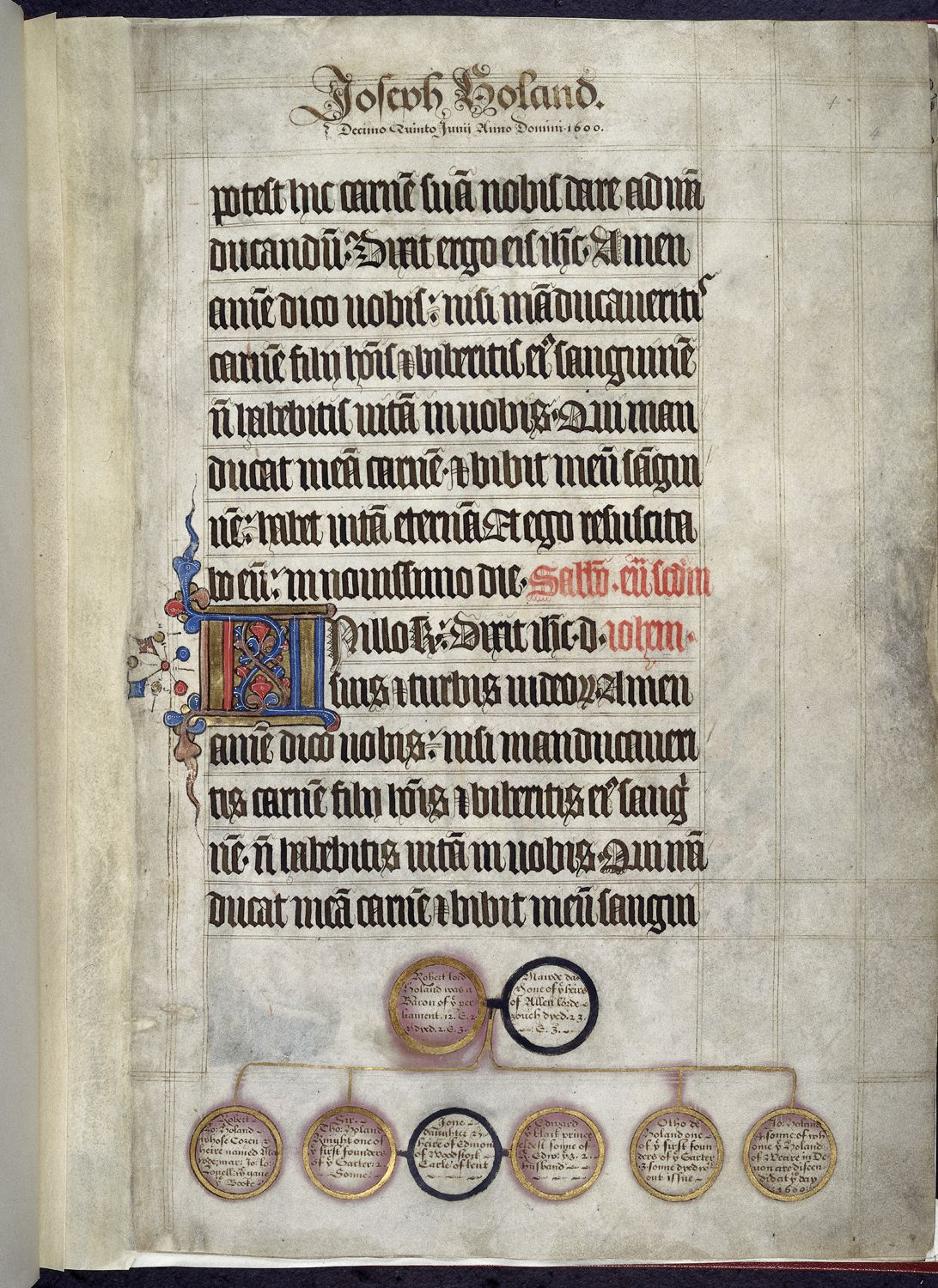 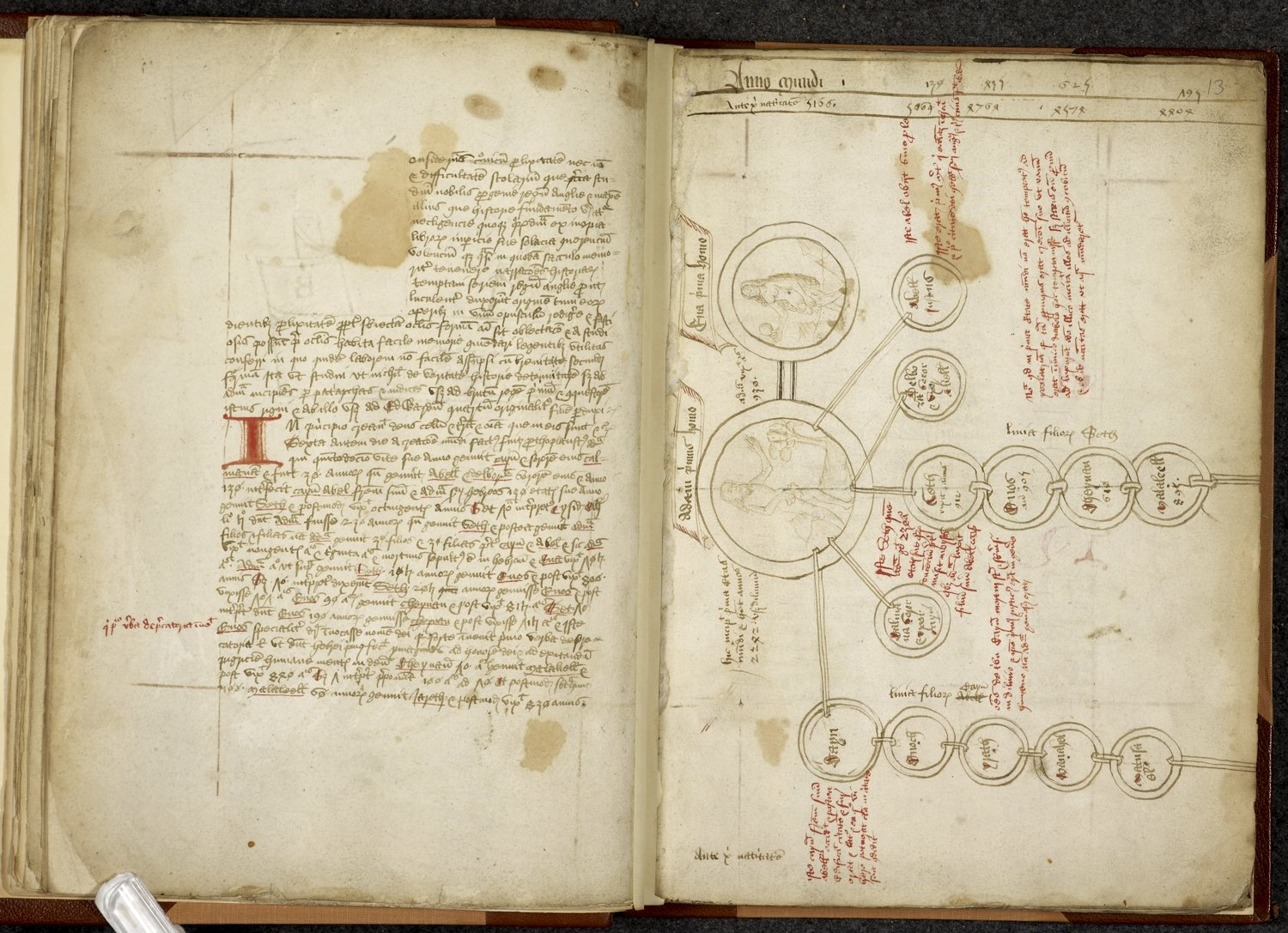 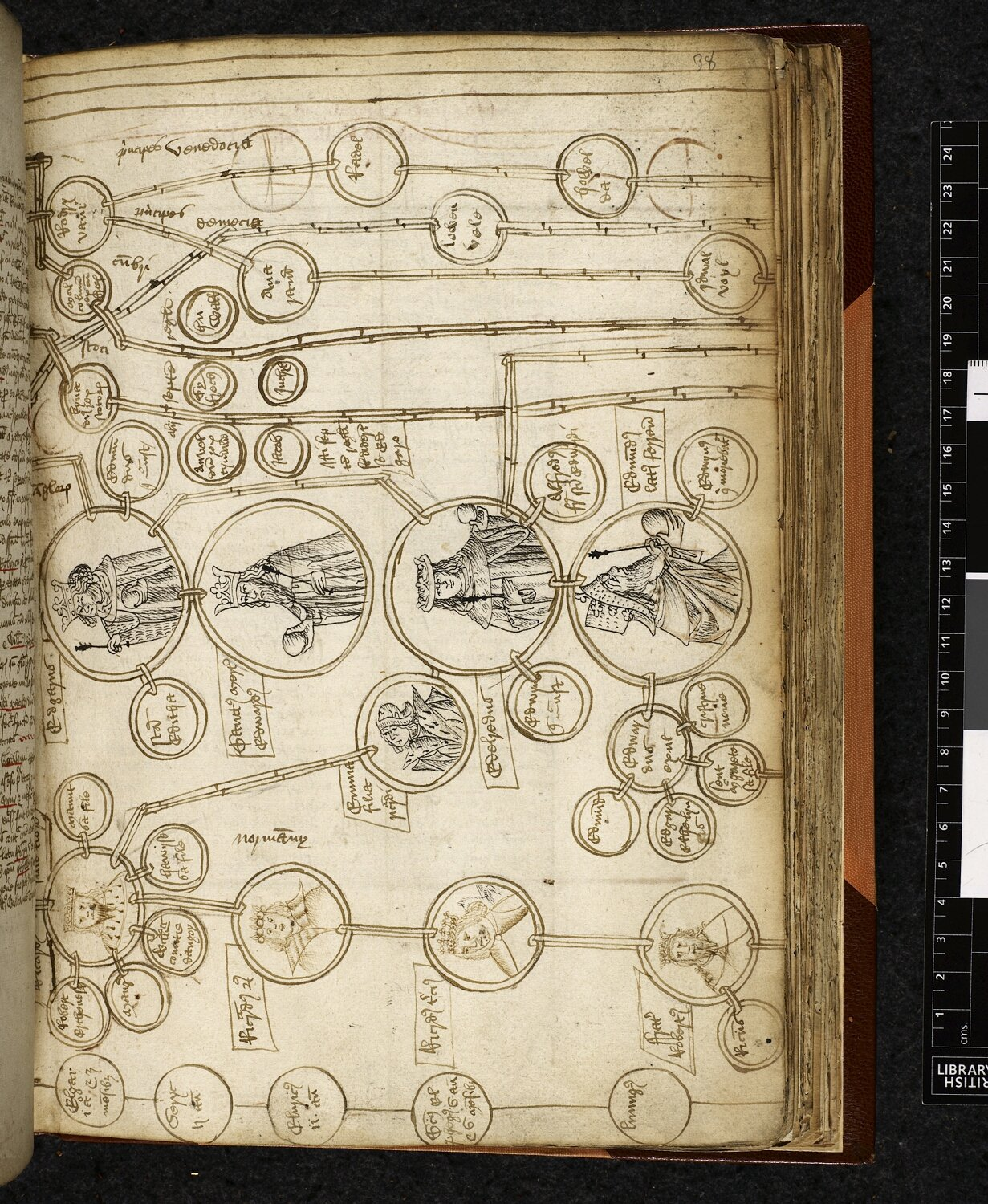 The Bodleian has a lot of great stuff too, which you can find here: [Link] The earliest looks like it is from the end of the 13th century.

Highlights from the Bodleian:

MS. Bodl. Rolls 5, view 36: Genealogy of the Kings of England to Richard III. Chronicle of the Percy Family to 1485.
c. 1485
[Link] – hopefully this will work. Linking to specific items in the Bodleian is always… interesting.
There are a lot of pages from this one. Totally cool. 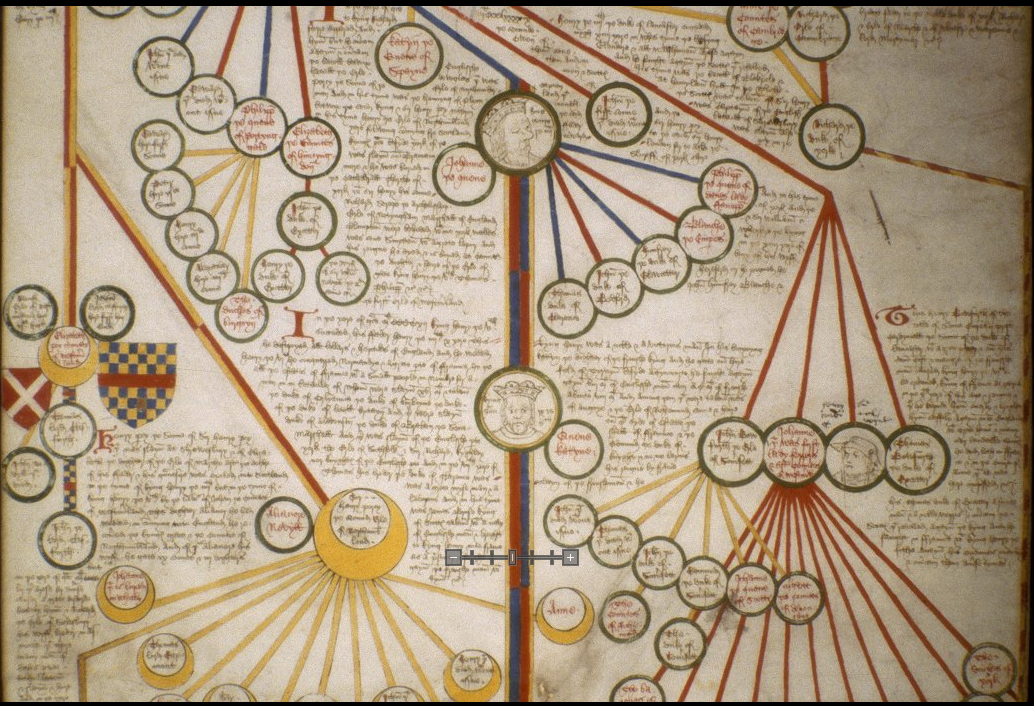 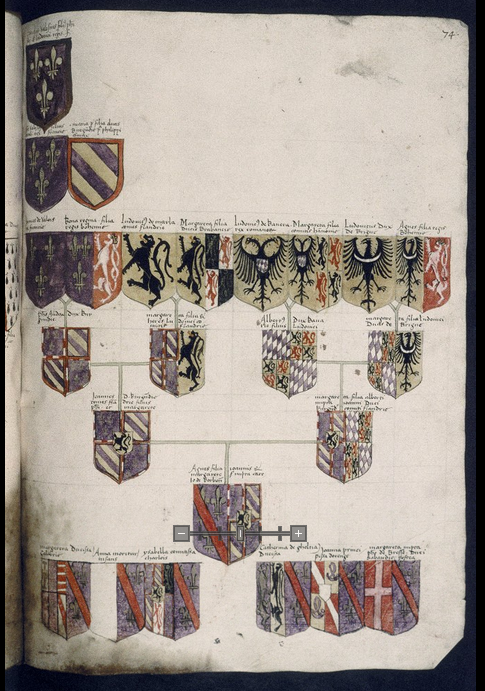 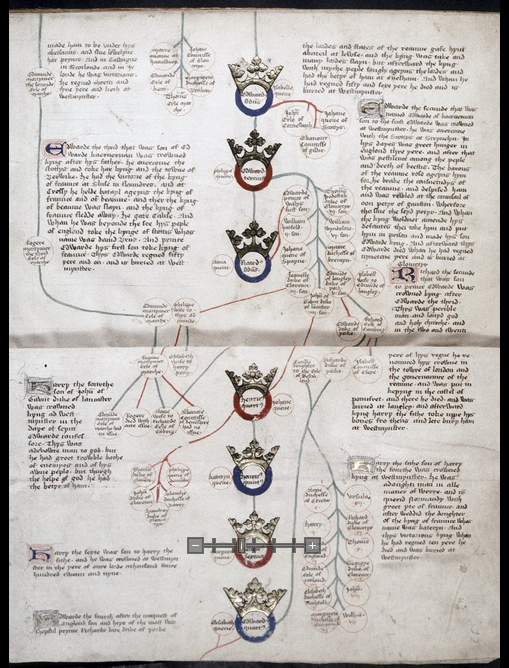